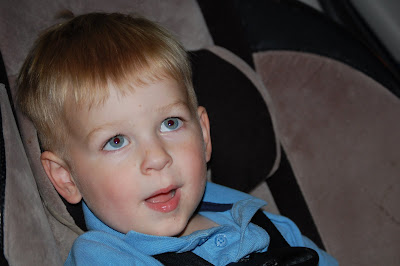 This is one for the book.
The Baby wakes up every morning with a different identity. He chooses who he is before he leaves his crib and he will remind you all day long that he is still that person. For each identity, there is a side-kick and I am usually given that role in the morning as well. For example, last week we were Tai and Abby, the snot and loogie crime fighters from the show Grossology. Sometimes we are Robin and Green Goblin. The Baby is never Batman. That is reserved for his big brother (what can I say-he knows his place.).
Whoever the chosen characters are, The Baby is adamant about us staying in character. He is quite into his Method. It is pretty adorable-most of the time.
Let me take you back to Tuesday morning at the gym. I am STRUGGLING on a daily basis with maintaining some exercise and diet consistency. I have been trying to go work out as soon as I get everyone to their respective schools because if I go home, I will then come up with many (bad) excuses not to go.
Today, I had some legitimate work to do before I exercised so I went home first. As the hours ticked by I worked and almost slithered out of a trip to the gym, but The Baby loves the kid-room so much that he kept bugging me to go. I eventually gave in around 11am and when we arrived I decided on a whim to take an hour long fitness class that would put me right at the time the gym daycare closes.
Well, I got so into the class (read-got my butt whooped by trainer lady with the distracting abs) that when I kept looking at the clock I could not for the life of me remember why I needed to know the time other than to see how much torture remained. I forgot entirely about the daycare hours and that I had to leave early. Then I started to berate myself because I thought I was trying to think up excuses to leave early. Right there in my head I argued with myself and decided I was NOT a quitter and I would stick it out all the way until noon even though I was shaking from fatigue. Literally, folks I thought I might pass out at 11:15 and there were 45 minutes remaining but NO I would soldier on.
I was so delirious when the class ended that I thought about skipping the shower that I usually take after class and just pick up The Baby to head home because in my craziness, I was sure he had been abducted. Yes, my brain that was clearly full of lactic acid had decided that the childcare was a factory and I was sure the women in charge had no idea who he was and would allow him to leave with any old mom that walked in. I talked myself off that particular wall, dismissing myself now as wimpy and insane. So, instead I showered-totally forgetting the daycare was closing right at the moment my flip-flops hit shower floor.
As I finished showering (about 4 minutes after I started) I was out toweling off and dressing when a woman walked in and said, “anyone here with a kid named Johnny.”
I immediately yelled from my stall an emphatic no. (Why so emphatic? Strange.)
Then she mumbled something about terrible mothers who don’t pick up their kids.
I wondered who would leave their kid in there so long that people would come looking for them. I also wondered if people still named their kids Johnny.
Then I tried to remember how long the limit on childcare is. At my old gym it was 90 minutes. I just joined this gym and didn’t recall them telling me anything about how long you could utilize childcare, but since it hadn’t even been 90 minutes I figured I was safe to continue dressing. Then I heard over the loudspeaker, “WOULD JOHNNY’S MOM PLEASE COME TO THE FRONT DESK?”
Then, with my bra barely fastened and my hair dripping wet, IT came crashing down on my like a tidal wave : childcare closes at noon. I am standing naked at 10 minutes past noon and oh,
CRAP- Johnny is my kid.
Of course, duh-Johnny Test went to childcare today, not G.K. They were probably asking him right then who his mom was which I am sure he answered (Johnny’s dog) Dukey.
Dear God.
I pulled on my jeans, stuffed my clothes in my bag and (thank God for 70 degrees in November) went running with my dripping wet head of curls flying behind me.
I saw the childcare lady at the desk.
Child Care Lady: “Do you have a kid named Johnny?”
Red Faced Me: “Uh…kinda.”
CCL: Strange Look
RFM: “His name is actually G. but he calls himself Johnny sometimes.”
CCL: “Did you sign him in?”
RFM: “Yeah, as G. Not Johnny. Sometimes he pretends to be someone else and that means I am too. It’s cute-really.”
CCL: Strange Look
Lady at Front Check in Desk: Laughing, “Oh, I wondered why he said his mom’s name was Dookie.”
Yep, Dookie. That’s me. Dukey. You know, either Johnny Test’s dog or…poop.
I knew I should have skipped the gym.
Thanks for coming to the circus. Cheers!
P.S. Looking for more parenting guidance and tips for self-care? Check out From Chaos to Calm a guided training to help you feel better in this tough season.