You are here: Home / Blog / A Girl Could Get Used to This 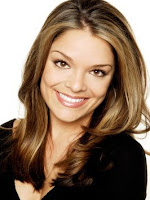 Sabrina Soto is luminous. That was my first thought upon entering the White Oak Bowling Lanes to film the HGTV show Real Estate Intervention on Monday morning. The whole family got to bowl at 8:30 in the morning. Just the Kings and the Senior strikers bowling league. It was fantastic. We bowled. We were filmed. We chatted with our new friend and the show’s Host Sabrina. She is absolutely stunning in real life and acted just like a regular girl, not a big shot TV star (ok, so what if it’s basic cable?).
Seriously, our overall take away from the day was that the people involved in this show are amazing all around. The crew was not only so accommodating to us and sweet to my kids (despite their obvious challenge to a television shoot) but they were all disarmingly handsome. Aren’t crew guys supposed to be “behind the scenes” types if you know what I mean? Well, all the guys involved (oh yeah, they were all guys-score) from Keith the Producer to Chris the PA could just have easily been on camera as behind it. Needless to say we had a great Monday in TV land.
The next day of filming was just for me and Kevin. We woke up to find our kitchen filled with hot coffee and delicious pastries and donuts from the Woodmoor Bakery. I mean, craft Services right in my very own kitchen? Awesome. It was fun to see our house used as a set with lights and cameras everywhere. Somehow, the guys all handled themselves and the equipment without making us feel bad about our ridiculously small house. It was quite an impressive feat. Tuesday was the day we met Real Estate Agent Extraordinaire Mike Aubrey. Mike is a local ReMax agent who has quite a track record even in these trying times. HGTV loved Mike so much on Get It Sold, they found a new show just for him. By the end of the day we loved him that much too!
When we first starting shooting with Mike, he assured us he was, “just like us” and not a TV person. Sorry Mike, but I will have to disagree. He was pretty amazing on camera and cool as a cucumber off as well. If I were staying in Maryland, I would definitely think of Mike for my next home sale or purchase. He had a way of telling us the cold, hard truth and making us feel comfortable all at one time.
The best part of Tuesday was when we filmed outside in downtown Silver Spring. It was ridiculously cold but who notices when you feel Ultra Hot? At the end, the four of us (The Talent-hee hee) were filmed walking side by side up Ellsworth Drive toward the camera. There we were, side by side trench coats and hair blowing in the wind, feeling just a bit like a badass. I just kept waiting for the Law and Order-bong, bong to sound behind me. For just a minute I forgot we were on a home show and not NBC’s biggest crime drama. I’m still giddy remembering it all. At the end of the I got to play my favorite role-TV Voyeur- and watch Sabrina do a few of her parting shot pieces in front of the camera. These are a bit more scripted and so it was fantastic to watch her do her thing. We got an obvious reminder who the real Talent was. Sabrina Soto is luminous.
Whoever says life in television isn’t that glamorous is lying right to your face.
P.S. Looking for more parenting guidance and tips for self-care? Check out From Chaos to Calm a guided training to help you feel better in this tough season.

« Girlfriends Set Me Straight
Meet The Middle One »