You are here: Home / Blog / They might be the best kids ever-no thanks to me. 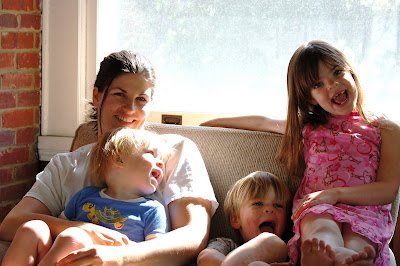 The middle one has been lying lately. Not lying so much as making up elaborate stories to explain how he has done something or obtained something. (Make that lying and stealing.)
Sometimes, he’s making up stories when he doesn’t even need to. Case in point, he tried to tell me the other day that he saw The Baby climb out of his crib run across the room and bring back a cup of water which The Middle one drank out of and then put back in the bathroom. (See, I would have had NO IDEA he got out of bed to get a drink-much less cared but he felt compelled to concoct this story to justify the whole thing.)
He also has been recounting things he used to do with his Grandma. He was 5 months old when she died so clearly they did not play dress-up together. Bizarre right? These are the times when I want to go back to school for a child psychology degree. What is going on in that little head?
When pressed he almost always fesses up and we have talked at length (poor kid) about being honest and make believe versus real.
Last night, the story was this: “F, I brought home four tokens from Chuck E Cheese and I came right inside and put them in my Mary Kay purse (yes, he has a purse). Then I gave one to G.”
He in fact did not bring any tokens home, but rather stole them from his sister than shared one with his brother. (Yin and Yang.)
I was changing The Baby as all this was transpiring and all I could think was, what am I going to do about the lying? It is a real problem. And it’s bedtime and I so don’t want to even address it right now.
Then this happened:
D: (walking into Sister’s room) “F, I am sorry about this, but here are your coins back. I can only find three so I’ll keep looking for the other one but here are three. Sorry.”
F: “That’s OK D. Thank you for giving them back and next time we go you can have one or two so you can play some games.”
D: “Thanks F. And I’ll share my tickets with you.”
BIG HUG. (I came in to see this part.)
I mean… Really? Sometimes they knock me over with their awesomeness. I did nothing except watch it all work itself out. Amazing. These are the moments that make all the crap worth it.
Now all I have to do is read this post when D (inevitably) rewrites history next time.
Thanks for coming to the circus. Cheers!
P.S. Looking for more parenting guidance and tips for self-care? Check out From Chaos to Calm a guided training to help you feel better in this tough season.