You are here: Home / For Parents / Babies and Toddlers / Talking about The Baby again 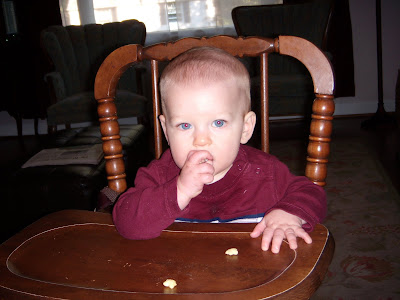 I am still sick as a dog. But I woke up to an email that I was about to lose this blog if I didn’t take action and I was quickly reminded how important it is to me. So, while I can’t muster up anything new, I wanted to provide something. I figured, on the eve of his birthday weekend, I would repost The Baby’s introduction post. In rereading it, I realize how much can change in a year. This boy is never still these days. Thank goodness though, he still fits on my hip perfectly and despite being almost three, want to be carried everywhere.
So today while I recover on the couch while he plays Wii for way too many hours, enjoy him. We do.
Baby Gwiffy-From 2/28/09

“We can’t name a kid Riordan. That’s a Bar where we used to live.” Kevin was opposed to every name I suggested. We couldn’t agree on a boy’s name. We already had the perfect boy’s name in Daniel Patrick so what the heck could we do next. Our dads’ names didn’t work. We wanted to leave Henry to one of Kevin’s sisters. Being the youngest, I was protective of them not having all the good names taken before they even had kids. Michael is my dad. A good middle name, but too many cousins to make it a first name. Finally, we decided on Griffin (which my sister later pointed out is also the name of a bar where we used to live).There was no drama surrounding the birth of Baby Griff. My mom had passed away two years prior. Kevin had a job he loved. My new business was pretty stable and we were finally not moving. We thought this was our chance to experience normal newborn baby stuff.Griffin had other plans. He brought his own drama. There was nothing terrible, just a lot of little things that continuously had us running. He’s had more doctor appointments, surgeries, ER visits and prescriptions than both our other kids combined. Griffin also took colic to a whole new level. We got our first full night of sleep the day after his second birthday and so far it’s been an isolated incident.Thank God Griffin is cute. I know I’m his mom, and you’ve heard this before, but this kid is really cute. He talks like a 5 year old, and has been since he was about 16 months. He quotes lines from movies, sings songs word for word and dances like no other two year old around. He has the bluest eyes you’ve ever seen. People stop us when we’re out to marvel at him. I say all of this not to brag, but to point out that there is a plan for everything. Early on, Griffin the person was not so cute to his parents, who were totally sleep deprived, broke from medical bills and just generally cranky. So he was made cute to attract other people who would remind his parents how lucky they really are.
Reminded we have been and now we know it for sure. This kid is one of a kind. He will demand what he wants and has no problem doing so. He isn’t afraid to take on bigger kids and fight for his rights as the youngest and smallest. He can mix it up with the best of them. He skipped baby shows and moved right into his older brother’s beloved Super Hero Cartoons. He has even been known to walk around saying, “I am Ironman” in a little raspy voice. Griffin is like a short old man. He questions your motives (“why’d you do that mama?”) and provides a running commentary to the day (“Danny, now we go pick up Faif from her bus.”) He is our entertainment.
For all his toughness and bravado, Griffin is the baby through and through. He fits perfectly into the space between my hip and head so he can curl right into my neck. Thus, he is still carried around quite often. He was the only one of three who was rocked to sleep until he was almost a year old. Although his birth brought on the Circus Madness, Griffin is also the reason we slow down and enjoy life. He likes to cuddle and be still and who can fight that request.
What about all the sleepless nights, hours logged at the doctor and CVS Pharmacy bills? I wouldn’t trade them for the world. Because for all the trials of Griffin he is still the one who reminds me what of all that is right with the world.
There is no price for that.