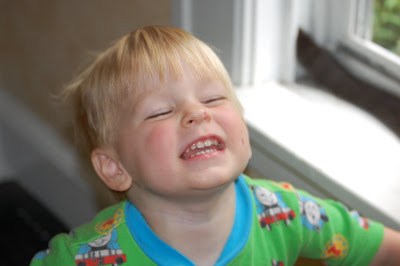 Two things happened yesterday that confirmed my belief that my two year old is the funniest person alive.
In the morning, I was typing away on this here blog while he was in the other room smashing action figures together.
He comes into the room and lays his head on my lap. This is what follows:
Me: Oh no, what happened G?
Two Year Old: Uh, I’m Pokey Doggie. (Oh, yes he’s often in character and does not hesitate to correct you on his identity.)
Me:Oh sorry. What happened Pokey Doggie?
TYO: I crashed open my head/
Me: Oh no that sounds terrible! How did that happen?
TYO: (Hangs his head in shame) The robots defeated me.
Me: Oh no! Can I fix it?
TYO: Yes
Me: OK, I’ll sew it up. (Make stiching motions.) All set. Ready to fight the bad guys again?
TYO: Looks forward then stretches his arms as if to fly and just goes “Pshhewww” and takes off.
The world is safe from robots again.
Later that afternoon I am sitting at the table doing homework with the oldest and up marches the two year old (like he had been out thinking about something for a while.) He stands square to me points his little finger and in his sternest voice (oh yes, he has a stern voice) he says, “No, you are not in charge around here. I am in charge.” Then plants his hand firmly on his hips waiting for my reaction.
My reaction?
Of course-burst into a fit of laughter.
He smiles and walks away, like-good, we’re clear then.
The sad thing? I think he might actually be in charge.
Thanks for coming to the circus. Cheers!
P.S. Looking for more parenting guidance and tips for self-care? Check out From Chaos to Calm a guided training to help you feel better in this tough season.