You are here: Home / Blog / Don’t lay your head back just yet 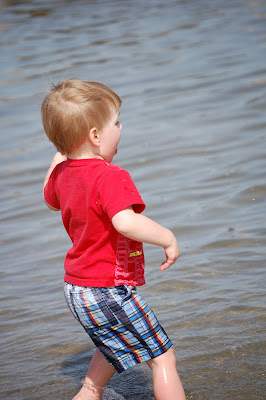 Yesterday we went to the beach after school and it felt like we had turned a corner. I got to lay down because they were all occupied safely. (Yes, lay down!! I haven’t laid on the beach in 8 years and then I was so pregnant I had to be rolled over like a whale and hoisted up by at least two other people! I haven’t laid-cute-on the beach since 2000. Yesterday, if I positioned myself just right, I could even catch a glimpse of hip bone. It was glorious. Clearly, I digress…) Now, I was positioned in such a way that I could see all three so it wasn’t like I got to nap or read, but it’s a start right. It sure beats the last seven years that have found me at the beach chasing, feeding, shell hunting, breaking up shovel fights or apologizing to beach neighbors for the sand they just had thrown in their face. Also, I have an irrational fear of the ocean. I grew up in the ocean. I got rolled in the ocean more times than I can count. I used to change my suit three to four times a day because there would be so much sand in it from the amount of wiping out I did in the ocean. Yet, for some reason as I’ve aged and then had kids, the ocean terrifies me. One wave and your life can change in an instant. When I see their tiny bodies up against that massive water, my heart tightens in my chest. Oh, we go and we swim-almost every day- because I want them to love the beach as much as I loved it growing up. But that doesn’t mean I am not scared out of my mind the entire time.
We had a great time yesterday because they all have a healthy fear so they don’t go into the surf too much. They kept a safe distance, just jumping waves and I laid and watched. I could actually feel my muscles relax a bit. Maybe, just maybe, the beach was starting to be the beach again.
Then, we got hit by the tide and while I turned my back for a second ( a second!) to move towels up the sand, The Baby left his post at the sand castle station and headed for the ocean where, of course, he got nailed by a wave and went right under. I Baywatch ran (some lady even told me I was fast. I haven’t been called fast since long before I last laid on the beach.) across the beach and scooped him up just in time for him to say, “I hate that mean wave.”
Me too buddy, me too.
So, I guess there’s no breaking out the reclining beach chair just yet.