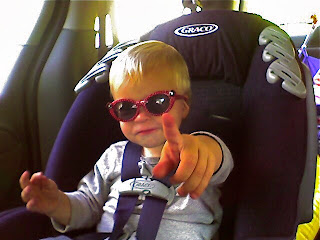 The Husband’s on a plane to Israel for the week. He left last night and will fly for another hour or so.  I don’t sleep until I hear from him and I’m not very good while he’s in the air. Thus, I have not much to say today as I’m a bit out of sorts.
Adding to my crazy brain are the events of yesterday. During a spring cleaning binge we packed up all the Thomas trains and tracks. The Baby announced he was too old and The Middle One (who had the Thomas obsession) said he was ready to give them to “some younger kid whose mom maybe can’t buy them all.” Before I packed them up, He went over each and every train. He was almost dreamlike in saying each train’s name as he turned the trains over and over in his hands.  It was as if he was having a reunion with old friends.
This morning, he woke up early to “help you out, mom”.  There was no normal morning riot. He did not incite his little brother into fits of laughter.  He ate quietly and we chatted about school together. He put all his dishes in the sink and even rinsed out his milk cup.  He was as cool as a cucumber because his dad asked him to be extra good to me this week. And he is.
After breakfast, he tied his own shoes for the first time and went off to school.
My baby boy.
I’m going to miss those Thomas Trains. 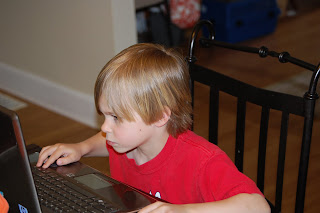 « I’ve Become One
Even YOU can make this »