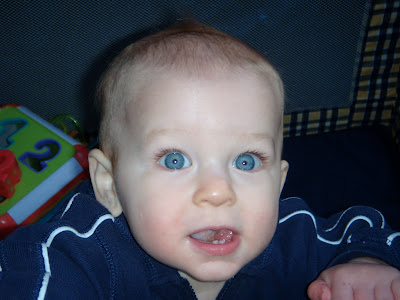 We were in the car and the new Britney Spears song came on. The Baby asked who was singing.(As he does every time a song strikes his fancy.) I said I thought it was Britney Spears.

There was a pause. Then a sweet little questioning voice repeated “Britt a ney Speeers“? It was as if he was trying out the word for the first time and was deciding if he liked the way it felt in his mouth.
Wow. He has no idea who Britney Spears is.
The Baby is about the same age as what I like to call, The Britney Incident. Remember? The months that we watched the total Spears come-apart? Please, don’t pretend you don’t read US Magazine. It was all anyone (well, anyone I know at least) could talk about. I am quite positive there were more important things going on in our world, but we still couldn’t pull ourselves away from Britt, K-Fed and the Boys.
There was the haircut, the paparazzo boyfriend, the MTV comeback debacle, the mom shenanigans and the dad takeover. It was great television.
I secretly rooted for a comeback. I argued that if I were 23 and all the same stuff had happened to me already, I’d be a mess too.
And here she is…back making hit records (do the kids still call ’em records?). And the next generation has no idea she was ever gone. I mean, I know Elvis died on a toilet-or some such foolery- but I am not traumatized by it like some of my music-loving compadres.
Maybe Brittney is my kids’ Elvis.
Man, I hope not.
I love you girl. Your crazy dance beats and digitally modified voice make every car ride and treadmill run a little better. Come back all you want Britney, but please don’t suck my children into thinking what you do is anything more than simple entertainment.
1.2.3…
PS-Readers-there is no Britney pic because when you google BS Pics you get all manner of “pre-comeback” creepster stuff if ya know what I mean. I was afraid, very afraid. Instead I subsituted this innocent cherub who has no idea who Britney is!
Thanks for coming to the circus. Cheers!
P.S. Looking for more parenting guidance and tips for self-care? Check out From Chaos to Calm a guided training to help you feel better in this tough season.

« Rosalita as a marriage counselor
Now this is pressure »