You are here: Home / Blog / Meet Virginia or Cristie 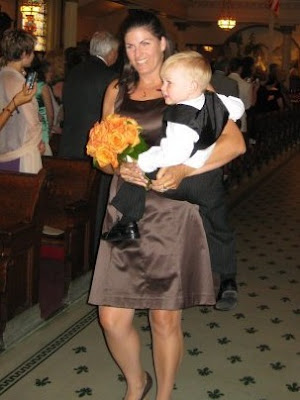 I often credit(?) the arrival of The Baby with turning my life upside-down. Make no mistake, the third kid is the reason I call us The Circus. Not Him in particular, but three in general.
It occurred to me today though ,that the third kid was also responsible for turning my life around-or at least my perception of that life.
I was running around the tiny track at the gym (trying not to get dizzy) when the song Meet Virginia by Train came on the iPod. The song (as songs are apt to do) brought me immediately back to the days where I was a mom of only one or two. The particular line, she pulls her hair back as she screams, I don’t really want to live this life–pretty much sums me up before 2007. I remember hearing that song and thinking, how do they know what I’m feeling? I am trying so hard to hide it. How can they see?
I have a few I wish I hads in my life. I don’t have many, and I almost never think about them. But for some reason when I was the mom of one and then two my I wish I hads were ALL I could focus on.
I went from being an independent woman with a career, to a struggling working mom then an overwhelmed stay at home mom and it seemed to me that somewhere my life had gone off the rails. I liked my time with my babies. I made the decision to stay home with them. I planned each pregnancy. I was not someone who motherhood “happened to”. It was a purposeful life choice and yet I was questioning that very choice because I was shocked that I wasn’t totally happy and fulfilled.
I went through the motions of mommy. My kids were well cared for. I had plenty of social activities for them and myself. I built a moderately successful business from my home.
Yet, it seemed my thoughts were consumed with the idea that I was supposed to be somewhere else. I wished I had tried New York. I wished I had taught in Europe. I wished I had traveled more and eaten less and partied harder. I wanted to be doing something bigger, more important. I wanted to make a difference in the world. I wanted to be someone entirely different.
I felt guilty for feeling that way, but it was there-I wanted out, or at least a do-over.
Then baby three came. He wasn’t entirely a surprise, but he also wasn’t 100% my idea. I was a bit reluctant to rock the boat and I was prepared for the worst.
But a funny thing happened-number three came into this world with the sole purpose of forcing my mommy hand. Oh, He was the worst and I was so not prepared. He never slept. He cried all the time-at least when he wasn’t eating and he seemed to need constant medical attention-nothing major, just constant. He wreaked havoc on what had become a well oiled machine of four Kings. It was exhausing. It was challenging. It nearly drove my husband mad. We had to get creative and learn to live anew.
Instead of burying myself deeper in the world of what could have been, The Baby forced me to live in the world of What I am. Guess what? It was insane and loud and chaotic, but I kind of liked it there.
Somehow, managing the three rings of our circus has given me the purpose and the pride that I thought I chose to move away from. I was a good mom of one and two and I am a fantastic, committed, heart-over-the-line mom of three.
Instead of wishing I was someone else, I have realized that as a mother, I am making a difference. I am doing something important. Rather than searching outside my family for an identity that gives me pride and purpose, I have found both right here in my own home. I know exactly who I am now. I am a woman who has chosen the roles of wife and mother in her life and I think I made damn good choices. I am opinionated, compassionate, kind, sarcastic and funny and not afraid to be any of the above.
I know there is precious little time to be still and adore these three little people. And I know that there will be plenty of time later to still do the I wish I had list. My life didn’t end at motherhood. Instead it began.
I don’t always get it right and I may wish there were more (or sometimes less) in my world.
But overall, since baby number three came screeching into it, I throw my head back and I scream: I really want to live this life. 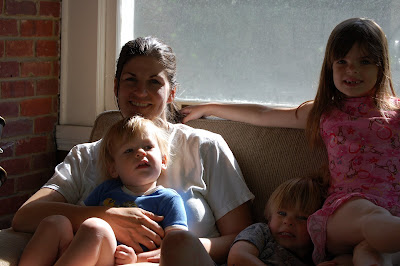 « Really? You can write about this twice?
Are you Flippin’ Kidding Me? »