You are here: Home / For Parents / Babies and Toddlers / Mama-remember when I got bleeded? “Don’t walk on the back of the couch honey, you may fall.”

“G, don’t run in socks on the hardwoods, you may slip.”
“No, no pumpkin. You can jump off the bookshelf. You might get hurt.”
“They are sword fighting. They can’t be safe.”
I spend most of my time trying to slow my kamikaze son down enough that he doesn’t get too hurt. He spends most of his time slightly bruised because even my best efforts can’t always keep him from falling, crashing into walls or door jams and banging himself up. I try my best to stop the really terrifying acts.
Is it irony then, or just Murphy’s Law that he split his chin open while simply walking across the floor?
We had just sat down for dinner on Thanksgiving when I heard the screaming. G doesn’t do family dinner yet. He’d eaten his fair share of appetizers, so we left him in the very kid-friendly basement to watch a movie while we ate. As I raised my fork to my lips, I heard a scream that I was, quite frankly, unfamiliar with. I got to the top of the stairs and saw the blood first. He was already on the lower level, so he couldn’t have tumbled down the stairs. There was nothing where he was sitting for him to have jumped, dived or fallen off of. Nope, it appears my stunt devil kid just tripped. He fell over his own two feet and then landed on top of his metal thermos cup (that’ll teach me to be environmentally friendly-at least he can’t cut himself open on BPA plastics!) cutting his chin open wide enough that he needed four stitches.
I calmed him down. My husband calmed the other two down-they were quite concerned with their brother (and whether they would still get dessert). My nephew threw me a washcloth to slow the bleeding (it was baaaad) and then we walked upstairs looking like a couple of murder movie props. My amazing family kicked into gear without a hitch and all three kids survived The Thankgiving of Stitches.
G wasn’t big on being swaddled like a taco for stitches in the ER. He sweated himself into a near coma with all the screaming and attempted thrashing. But overall, he did just fine-entertaining the staff and us with his unstoppable personality. Now we just have to survive getting them taken out! 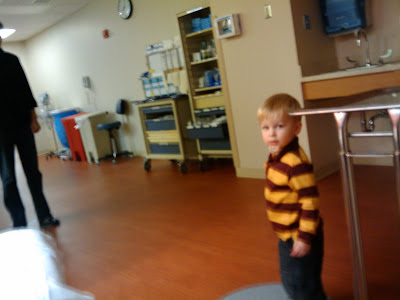 Parenting is all about experiences. Life becomes a checklist of been there done that. Thanksgiving Dinner spent in the local Emergency Room? Check. On to the next.