You are here: Home / Blog / Community 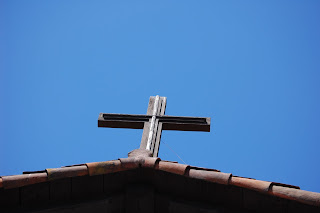 My husband and I are both the same religion but we come at it from very different angles. I grew up very involved in my church. I was a member of the parish youth group and retreat program well into college. Now, I wasn’t some Charismatic Young Lifer (not that there is anything wrong with that) but I did get a very solid foundation in faith from my young adult years in my church.

The husband went to Catholic school from Kindergarten straight through college.

He knows a lot of stuff.

Now, I’m not going to comment on his faith because quite honestly no one can do that about another person. But I will say this, he is much more comfortable in a traditional catholic church than I. He is much more comfortable with the obligation of attending church and if he never actually gets anything from it, so be it. He is much better at compartmentalizing what he believes and what his church believes. 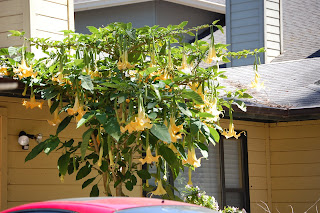 I tend to seek out places that push boundaries, or at least admit not all the boundaries are perfect.
I spent a year and a half at the stodgy traditional church in town. I took in the gorgeous old building and tried to focus on how great the choir sounded. I mostly tried to ignore the text book homilies and the fact that no one shook hands at the Kiss of Peace for fear of spreading swine flu. (Really?!?) I was there long enough that I actually considered changing religions. I thought, if this is what we’re about, I need to find another place to worship.

After being there a while I heard of another Catholic church in town. I decided I’d give it a try.

The very first time I entered it was a bit jarring. It was bright and relatively new compared to the turn of the century church I was used to. They lined up for Communion funny and sometimes stood when they should kneel. They had progressive, folksy music (the one old thing I tend to favor-hymns) and guitars instead of organs. I was disheartened. I thought this wasn’t going to do it either and I just wanted somewhere to belong. Then the priest prayed for people who were “seemingly unwelcome here”. He asked that they would come to understand God loves each of his children and that is what matters above all. 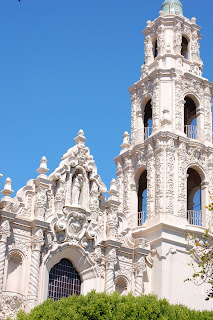 This weekend my husband and I went to church together. This is rare as we usually divide and conquer with the kids. He has only been to “my” church on Christmas and Easter preferring mass at the other church in town.
The place was packed. There were four baptisms and I’m pretty sure each baby had 200 family members in attendance. After the homily, when it was time for the baptisms. The cantor started shaking a tambourine and calling out saint names. The congregation answered back “pray for us” after each name. I could feel The Husband’s spine stiffen.

Then, the altar servers, followed by the priests started leading the babies and their families down the aisle out into the area where the baptismal font (read:giant water structure) resides. At this point we’re all clapping and singing When the Saints Go Marching In. The uncomfortable aura that my husband was casting was so strong you could almost physically touch it.

We both realized at the exact same moment that we were ALL going out to watch these babies get baptised. We were ALL going to clap and sing and welcome them into our community.

I immediately welled up and thanked God for this beautiful place that I had found. A community where we all take part in sacraments and we all are in it together. A place where it’s not about pomp and circumstance or Tradition, but about the joy that should come when new people (especially babies) join your Family. I got teary eyed and my heart filled with thanks for my blessings.

This was so far out of his idea of what happens at church he wasn’t sure what to do. He was a trooper though. He hung around the outside periphery of the group but he did clap and sing his way out. He only muttered, “I’m going back to St. J’s” once. I was proud of him.

At the end of church we were walking out and we must have run into three or four families from our kids’ school. There was hand shaking and introductions. (Husbands rarely meet.) I watched The Husband visibly relax and look as if he’d done this before. This was the part he was seeking.
As it turns out, he may just go back. Because it seems, no matter how the ritual of mass goes, we both want the same thing: community.
And we may just have found what we’re looking for. 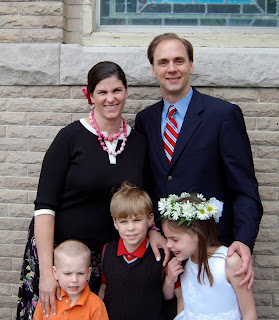 « Safe Credit Counseling
Maybe my word choice could use some research »