You are here: Home / Blog / Fahionist…O? 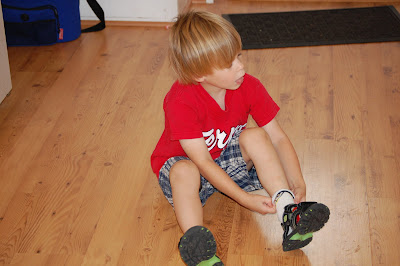 The Oldest has been dressing herself for many years. Luckily, until this year she has mostly worn dresses so there weren’t too many variables. Occasionally she will come down in something wildly mismatched. After discussing the probable fact that she will be teased by someone, I let her decide if she’s up for the challenge. So far it has worked pretty well. She even parroted back to me the other day, “mom, as long as I like it that’s all the matters right?” Lesson learned.
I did not expect to have to worry about this with the boys. I figured keeping them relatively clean would be my only clothing worry. Then The Middle One started showing signs that he has a VERY definite opinion on fashion-his and other peoples. He went through a matchy-match stage where every top and bottom had to be the same color. Now, he is learning the idea of complimentary colors and that matching doesn’t always mean the same. He also dresses himself in the morning and if I dare lay anything out he will change some element just to be independent. I haven’t had to worry much about what he wears in public. He’s pretty spot-on.
The one area where we clash (no pun intended) is his penchant for red socks. He loves them. He would wear them with everything. The only time he wants another pair of socks is if they have characters on them .
I have given in and learned to accept the red socks as an adorable quirk. Someday, I am sure I will miss the red socks. For summer there are usually no sock dramas as he usually wears Crocs.
Just this week, his Aunt Suz was visiting and she got new sandals for him. They are cool, light up sandals. He loves them. His old sandals made their way to the garbage because they stunk-I mean grown man-smelly feet-embarrassed in the shoe store-stunk. These shoes were sort of a tennis shoe/sandal combo. We explained that they stunk because he wore them without socks. B
Big Mistake.
Today he came down and was very perplexed because he couldn’t find his red Lightening McQueen socks. I reminded him of the black and white LM socks-figuring he decided to wear tennis shoes.
Nope.
My biggest fashion fear realized-my kid had on sandals with socks.
When I asked why he said he didn’t want his new sandals to stink. I tried to explain these were different and he could wear them sock-free with no risk of the old smell coming back.
He looked at me like he wanted to believe me, but just couldn’t risk it.
From the other room-Faith says, “as long as he likes them, right mama?”
Damn. Foiled by my own life lessons.
I guess I’ll miss this look someday too. 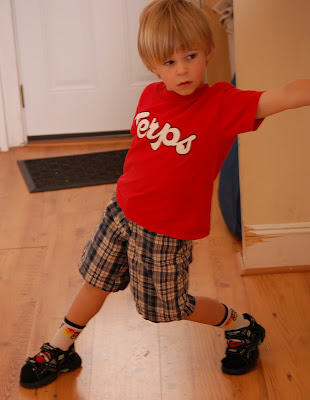