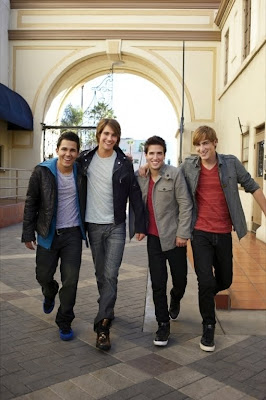 The Girl has her first television crush. I mean, let’s be real-The Girl has known the power of boys since she was batting her toddler eye lashes and she even had a crush on a real boy already (even if she didn’t really know it). But, now she has an actual teen pop-star crush. His name is James and he is on a new Nick show. He is the prettiest one. I might have hoped for Carlos, but she’s young. She’ll learn that the pretty ones are usually more trouble than they’re worth-soon enough.
She gets all silly when she says his name. Her dad hates it. He won’t even let her talk about it. Her brother is confused by it. He just tries to change the subject back to Wii.
I think it is divine. I mean who doesn’t love crushes? They’re so fun. I still have them-on lots of folks. I even write about them here and here.
Tonight she said, “When I was telling D about James, I accidentally said I love him instead of I like him. Is that bad? (giggle, giggle)”
Adorable.
This is one reason why having a girl is just so lovely sometimes.
Thanks for coming to the circus. Cheers!
P.S. Looking for more parenting guidance and tips for self-care? Check out From Chaos to Calm a guided training to help you feel better in this tough season.