You are here: Home / Blog / Your Babies 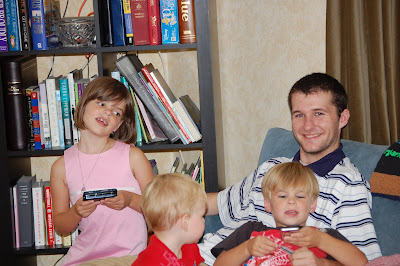 Dear Mom,
One of your grand babies graduated from college this weekend and it made me think of all that you’ve missed. We miss you like crazy, but every now and then I feel sorrier for you. I know you’re with all the people you love, probably laughing all the time, but there are some things down here I wish you could see too.
The Boys were seventeen when we lost you. They were incredible then, so I’m sure it comes as no surprise to you that in five years they have grown into remarkable young men. J is heading to graduate school to hone his writing. Everyone says he’ll teach. I say he’ll win a Pulitzer or whatever the Fiction equivalent is. We spent some time with him over New Year’s Eve and he is just lovely. His intelligence is obvious, but what others came away with was how kind and easy to be around he is. You would be so proud. His brother is equally amazing. He literally makes me cry laughing whenever he is around. When he figures out what the rest of us already know:that he is incredibly smart, talented and has the quickest wit imaginable, then he will contribute great things to this world. Everyone around him sees what he is worth. He just needs to catch up with us.
Last weekend I saw W play lacrosse. Of course he is amazing. I am sure that comes as no surprise. He is also, very recently, tall. That might shock you a little more. He is this beautiful combination of his parents in both looks and spirit. He is handsome as can be with his dad’s hair and his mom’s smile. He shoots to the top of the pack in most anything he decides to do from sports to music. He is looking at colleges now. His first mention was Stanford-just like me. The difference is he could actually get in. I was a bit delusional and blinded by love of all things California. Maybe we all go through that phase. Luckily he too realized that would break his mother’s heart. He didn’t say that of course, but when the college choices moved closer to home, I had my suspicions. I can’t even predict what he’ll do when he chooses a path as a grown up, but I will say I can’t wait to see.
As for my three, well the first news is that there are three. You missed The Baby but my guess is the news of him has made it up there because he is notorious. The Girl is just as you left her-taking the world by storm. She is warm and kind and wiser than her years which I am both proud of and sorry for. She knows a lot of pain and change and I wish she didn’t. I have told her everything I can about you to keep her memories strong. The other day I heard her brother asking her to tell him stories of Grandma Toni. I have no idea if she got anything right, but I loved the idea of her passing you on to her brothers so I just let it go. The Middle One is all grown up. He is as cuddly and sweet as he was when you left him. But now he weighs close to 40 pounds and is taller than my waist so cuddling is a full contact sport. He is just like your M.A. mom-all raw nerves and wide open heart. It is a challenge to raise him, but I wouldn’t trade it for the world. And The Baby? Oh mom The Baby-what to say? His older brother came in and kept quiet so we could properly grieve you. The Baby, well I guess He came into the world and decided the grieving was over it was time to kick, scream and cause a fuss. He is one giant character. He challenged every fiber of my motherness. In the beginning when neither The Husband nor I thought we’d survive, I needed you so much. Even though all you would have done was tell me to suck it up and stop whining. He made me miss you all over again.
Now it is the same. I wish you could know him. He is hilarious and smart and pretty stinkin‘ cute. We have enjoyed having him be young as we’ve had no one else come along to steal his thunder. Just like I was to you because I was the only one around a lot-he has become my buddy. I complained a lot when he was new, but now I have nothing but laughter.
That’s it for now mom. You were right to be so proud of your grand kids. They are all turning out just as you suspected-even better than all of us. You have left quite a legacy and their parents have done their best to protect it.
We miss you. We love you. We are so thankful you are ours.
Your Baby,
Cristie