You are here: Home / Blog / Table for Five 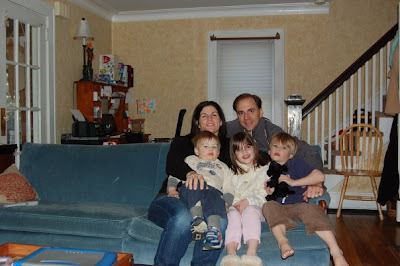 When we had the third, we felt like we had triplets. Somehow, adding one to two seemed to make exponentially more than three. We got over it. Maybe we got used to it. Either way we were sailing pretty smooth.
Then He turned three and now we face a whole new set of challenges.
We are moving (I know. Yes, again.) and in the new house we will have room for a kitchen table. The house is smaller than our current one, maybe even than our old one-which is SMALL- and yet because there is a table space kitchen I feel like I’m moving into the Taj Mahal. It makes my husband crazy. I waltz around in a “Yippee-I get to reclaim my beautiful glass and wood chic and modern Calligaris dining room table just in time to rescue it from peanut butter and spilled milk hell” kinda way and The Husband growls about one bathroom. But I digress. Besides, that is a post for another day.
For now, let’s focus on the boy who turned three and decided he would never again sit in a high chair. He has tried before to escape the high chair but he never sat still, instead preferring to take his meals like a grazing cow and wander between chair and television. We have an old fashioned wooden high chair as a result of aforementioned small house so it doesn’t really look so much like a high chair when we put him up at the head of the table. Because of this, we have been able to trap… er-secure him in his highchair pretty successfully. Until Sunday, when he turned three.
Then he decided big boys sit at tables. I told him he had to stay and finish his meal or else back to high chair city and as you can imagine he stayed put-stubborn little punk.
So, for now I have to figure out how to seat five at our table for four (that is now covered in an industrial strength table cloth because salvation is near!). Then I have to find a kitchen table that seats five. Do you know how difficult that is? I thought I would just get a round table, which works- in theory but guess what-they ALL come with four chairs. It’s like it’s the world’s way of telling me I have the wrong number of kids. If I had one less-we could all fit. If I had one more, we’d just have to get the farmhouse table and forget squeezing into a corner. But here we are-stuck in family limbo. Five is not huge and five is not small. Five is not comfortable either. We can’t comfortably fit in a booth but we’re too small for that giant center table with six chairs. We can’t comfortably fit in a sedan but the van still seems so big.
Five. It’s…well, odd.
I thought I was over it. But I guess I’m still making sense of it. My oddness that is. I guess it’s just a matter of perspective and all I really know is I wouldn’t change a thing.
Time to start investigating the kitchen corner booth.
For my Taj Mahal.
Thanks for coming to the circus. Cheers!
P.S. Looking for more parenting guidance and tips for self-care? Check out From Chaos to Calm a guided training to help you feel better in this tough season.