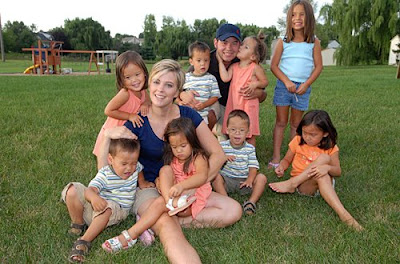 I know what you’re thinking, “Oh my gosh woman-marriage talk again? What the heck is wrong with you?”
It’s John and Kate I tell ya. I NEVER watched them before this month. My sister did and she would always ask if I watched. I would tell her, “I have enough chaos in my own home. Why would I turn on the television to watch someone else’s chaos AFTER my kids are in bed?”
Then I got a pedicure in a salon that had every tabloid cover of John and Kate known to man.
I was intrigued-mostly because it seemed their story (minus the eight kids) is not so different from regular folks that I have known who separate. Then I watched a few episodes, to see for myself and what I saw has gotten me all itchy about the state of marriage in America.
Sure, to our television eyes, Kate is a bit of a shrew. Sure, John has every right to demand she treat him better. No, Kate is in no way the sweet victim she is trying to portray herself as on the air.
BUT. BUT. BUT. BUT darnit!
Was there even any TRYING before he decided to move out? Were there conversations wherein John said, “Hey, Kate-you’re kinda a shrew. Think you could do something about it? ‘Cuz if not I might leave and that would suck since we have eight totally innocent kids who will be hurt by that.”
In John’s defense-maybe there were conversations and Kate wouldn’t change.
BUT. BUT. BUT. BUT DARNIT!
What if there were NO conversations? What if John just woke up and said, “Damn, I’ve spent the last ten years being treated like a total schmuck. I have no control over my life. I have 8 kids and I’m only 32. I have no job. I’m middle-aged pudgy and have plugs that I probably didn’t even want. Man, I need to get the heck out.”
What if?
What if?
What if the only conversations John had about his marriage were with himself?
I am afraid sometimes we (and by we I mean self-obsessed, Oprah-y in touch with our feeeeelings, instant gratification hog Americans) have all the conversations in our heads. We work all the scenarios around in our mind for weeks, months, years-until we figure ourselves out. Heck, maybe we even talk to other people-gather opinions and advice. Then, by the time we actually confront the other person, the real person involved, we know the outcome (or think we do) and therefore we give them no chance to redeem themselves, or change, or work harder.
That sucks. For John and the rest of us who have been guilty of this before.
I am not defending Kate-she appears to be a shrew. But at one point, he picked her. One day, not so long ago, he thought she’d make a good mother. So, shouldn’t he at least give her a chance to know that what she does is hurting him and then try to make it better?
It seems that is the least he could do- for the Plus 8, if not for Kate.
Thanks for coming to the circus. Cheers!
P.S. Looking for more parenting guidance and tips for self-care? Check out From Chaos to Calm a guided training to help you feel better in this tough season.