You are here: Home / Blog / Just a second I have to check this message from Mr. Booker 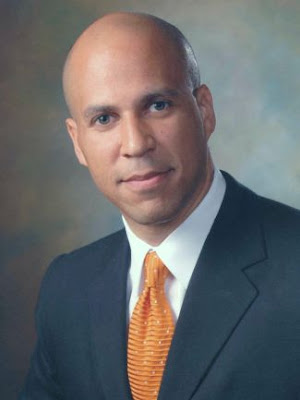 I was all prepared to write about our foray into Kindergarten at a Charter School. You know, staunch advocate of public education sends her kid to a charter-what the? That will certainly be a post for another day. Wanna know why? Huh? Huh? Well, I woke this morning to get the house going and per usual I checked my phone. Along with the 27 emails that came in (while I slept!) I had a text message via Twitter from Cory Booker. Yes, Cory Booker Mayor of Newark sent a Direct message…to my phone. Well, happy Friday to me.

Now I must confess, in case you don’t follow me on Twitter, last night I tweeted that I had a wee crush on Mr. Booker because an indomitable spirit is an attractive thing. His tweet “Yes, you will fall and crash but never let your dream die Only those who fall again and again discover they can fly” is what inspired my confession. I swear it is not just because he is easy on the eyes. (Probably doesn’t hurt though.) I follow him on Twitter for the same reason I follow @RevRun (even though sometimes I still think it’s weird that he inspires me spiritually and not just to dance.) because almost daily his tweets make me want to go out and take on the world. So I sent out a message, expecting nothing. Then he responded to me. Me? I am no one. I am not Conan O’ Brien. I have donated no money. Heck, I’m barely registered to vote in New Jersey and I’m certainly not a vote in Newark. But he saw my Tweet and took a second to respond, not because it got him anything, just because that’s what he does-listen and respond to people.

I have followed Mr. Booker far longer than I have lived in New Jersey. His star has shone brightly in my universe. Cory Booker is everything I wish I was and everything I hope I can raise my kids to be. He has a clear sense of right and wrong and will not stop fighting for what is right, no matter the political ramifications. In fact, when he lost his first Mayoral bid, rather than scheme for the next, he hit the streets and started an organization that directly helped the members of the community. Sure, this had positive political effect later, but he could have gotten the same results through back channels and fat cat donors like most NJ politicians seem to do. I won’t go on and on about him, because I could. What I will say is he fights hard, laughs out loud and-bottom line-gets stuff done. Really done. He gets things done that people here in Jersey are passed believing in. He’s reduced crime-really, like the lowest rates in over 50 years. He’s decreased the size of the government in Newark (take that Republicans). He has brought in tons of private philanthropy dollars to the city. (I know, tons? C’mon-I’m not a news writer I just play one on the Internet. You had to know that when I started out by admitting I had a crush on the guy.) Most importantly, he has motivated the people of Newark to stand up and take back what is theirs. Cory Booker is what everyone in public service should be-dedicated, honest, and passionate about not the job, but the people who got him the job. Evidence to his dedication? He turned down an Obama White House position citing his commitment to Newark. I’m not sure I could have turned down and Obama White House job, but Mr. Booker did.

That’s what’s important to Cory Booker-people. He is not from Newark as I am not from New Jersey. But where you are from doesn’t matter. What matters is where you are and what you do to make that place better. What Cory Booker wants and what he works for is what is best for the people of Newark. Isn’t that what we want from all of our leaders?