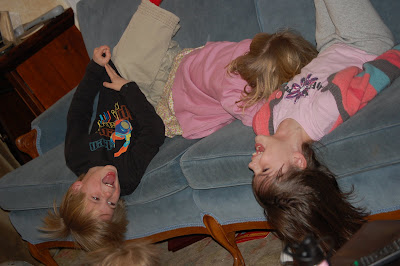 I recognize my own brand of crazy in my kids sometimes and I do my best to try to teach them out of it now so that they don’t have to spend their adult lives working to fix behaviors that are so ingrained it becomes daunting to try to change them.
First it was the girl. She would habitually wander into the kitchen, open cabinets and whine, ‘I’m hungry.” I didn’t realize it at first, because I was still in “baby mama” mode where all you concentrate on is nourishment. Eventually though, I caught on that she was old enough, and fed enough not to be hungry but actually just bored. So I told her that and let her in on the secret that I too, when bored, reach for the cupboards. Now, when she asks for food I ask her, “bored or really hungry?” and about 80% of the time she smiles shyly and walks away. In the beginning, I helped her find alternatives-games, books, etc. Now, she can handle that all by herself.
Score mom and kid=1 and Crazy=0.
Lately, The Middle One has been exhibiting some mom crazy. As soon as the boxes for the move came out, he started acting like a caged animal. I recognize this as either, anxiety means extra energy or cutting off your nose to spite your face. These both fall into my kind of crazy. The anxiety/energy connection is pretty evident. If I can keep him out of the house, away from all evidence of packing, he is his usual good-natured self. However, if we’ve been surrounded by boxes of belongings for too many hours, then he starts running through the house crashing into whatever is in his path-things and people alike. You can imagine the scene with objects flying and siblings crying. It is not pretty. He is high energy and he is making everyone else mad in an attempt to make everyone else feel as out of control as he does. (This is where the cutting of the nose comes in-if I can’t get a handle on me, no one will.) It doesn’t matter to him how much he gets in trouble or how many privileges he loses. He is off the rails and it takes a kindred spirit to see it and get him back on.
Last year it took me months to help him work to get back to his normal self, probably because I was too wrapped up in my own madness to appropriately deal with his. With this move though I caught it early and we seem to have nipped it in the bud. First, I mostly pack when he isn’t around. Second, we sat and chatted about what I saw (his behavior) and what he thought it meant. I gave him hints of course, reminding him that the last move was huge and maybe he was worried about that and worry was leading to wacky. He is a smart boy and immediately identified what he was feeling. (Mind you this all took place over a very involved game of Lego Space Police and a few nights of bed time, so please don’t think I have some magical therapeutic relationship. He’s still a boy.) We talked about how this move is not nearly as huge. We talked about his upcoming bunk beds and how his friends and school will stay the same. Then we came up with some alternatives for behavior and a catch phrase for when he feels he is starting to get “silly”.
His behavior has abated substantially. His smiles have returned and mostly we’re alright. What we do have hear an awful lot these days are deep breaths followed by, “it’s all good.”
Looks like we’re two up on crazy. For today.