You are here: Home / Blog / Help a Mother, Heal the World
When we were in the thick of our financial despair, I woke up every morning and thought about how I was going to keep my kids from feeling it. It was awful. I worried so much I had physical manifestations.
But in all of it, even at our worst, we still had four walls and a roof over our head. We still had clean water. I was healthy and whole.

Throughout all the months of our struggle here, I was acutely aware that no matter how dark it got, we were still very very fortunate compared to most. I vowed to get us right so that we could become givers. I promised myself that as soon as there was even a dime left after paying bills, I would give half of it away and do all that I could to encourage others to join me. Through this blog I have been given a voice and I am determined to use it for good.
So begins 2011-the year of Traveling Circus Giving. Today, it starts with a foundation that directly benefits mothers. What is more powerful for change than that? 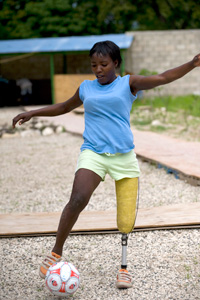 The Haitian Amputee Mothers’ Alliance has a motto that is Restoring Hope, One Mother at a Time. This group was brought to my attention by another blogger, Holly from The Culture Mom. She attended a fundraiser for this organization and was not only inspired by the work they do, but similar to me she is driven by a passion for doing good with the vehicle her blog provides. Holly put out a call to bloggers to band together to reach out and make a difference. I answered that call.
In an effort to save lives, it is estimated that there were thousands of amputations performed in the aftermath of  Haitian Earthquake last year. A group called “The Village of Vision For Haiti / Foundation Enfant Jesus (V-V-H-F), agreed to take in approximately 60 mothers who have become amputees as a result of the earthquake, along with their children”. *

Thus, HAMA was created with the   mission  to get each of these women fitted with prosthetics and rehabilitated so that they can continue the business of taking care of themselves and their children. It only takes $3000 to accomplish this for one woman. Holly and I thought with the people we reach through our readers and fellow bloggers, we could raise at least enough for one woman. Imagine you being part of literally giving a woman her life back.
Imagine. 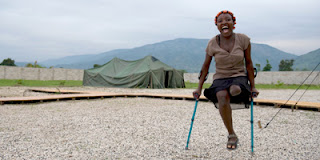 It’s super easy too. We’ve established a donation page that will take the money and funnel it directly to HAMA. It’s as easy as three clicks and it’s secure. I used it myself before sharing with you and my credit and identity remain in tact. The actor Edward Norton is behind it, so all you Marylanders reading this should feel reassured.;)
The anniversary of the earthquake that devastated Haiti is next week-January 12th. Remember back to how you felt one year ago as you watched the horrible images on television. Remember how your heart ached for those people. Remember how you wished, even for a second, that you could do something.
Remember that.
Then DO.

Click HERE to get to the donation page. 5 minutes and ten dollars could change a family’s life. You hold that power.

« Diets are for Quitters
It’s Here! »