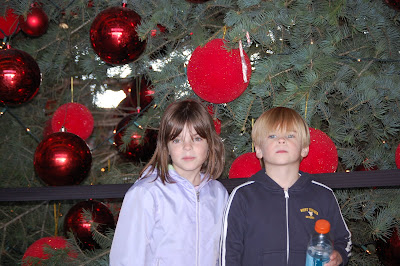 Sometimes, when everything is going just right, my heart hurts with the joy with which my children fill it.

The two olders are in this magical place now where they are really getting along. The Middle One has worshiped The Girl since the day he was born. Seriously, as an infant he looked up at her like she was the only thing in the world. She on the other hand, has always been mostly luke-warm about him.

When he was born I said a little prayer that they would have a relationship like my old friend Adam. Adam too worshipped his big sister. She- in turn- thought he hung the moon. They were sweet and playful and never mean. I knew them as teenagers and being around the two of them just made me smile. So, when I had an oldest girl and then a boy I hoped they’d be like Adam and Rebecca.
Instead, they had their moments of getting along, but he is all boy and she is all girl, so mostly they clash and He turns to his little brother for companionship and sword fights.
In the last few weeks though, they have discovered a mutual admiration for creative play and Sponge Bob. They have elaborate games that they play involving knights (with swords of course) and princesses, or daddies and babies and of course Patrick and Squidward. I can hear them while I do dishes or make dinner. Every Saturday night we set up his mattress on her floor and they have a sleepover. They are more than getting along. They are really enjoying each other’s company. They are becoming friends.
That is what makes all the fighting and crying, whining and complaining, worth every single second.
Raising Friends.
Thanks for coming to the circus. Cheers!
P.S. Looking for more parenting guidance and tips for self-care? Check out From Chaos to Calm a guided training to help you feel better in this tough season.