You are here: Home / Blog / Bested by the Potty 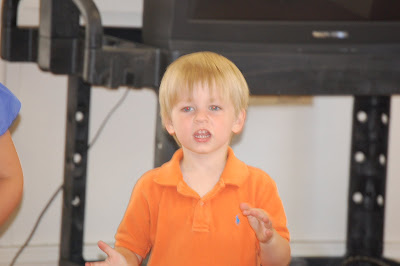 I have three children. There is a measure of confidence that comes as your children age. You start to realize you can make good decisions. You start to trust your gut more and more. You leave behind that scared little girl who is certain every choice she makes is not only wrong, but could be fatal and you start to embrace the new you-the one who stands a little taller and thinks more of herself than she ever has before. After all, the proof of your abilities wakes up every morning and gives you a hug.
Help me understand then, with my new found self-confidence, how I have been bested by child number three.
Let me explain. I have never “potty trained” anyone. With The Girl, her daycare provider decided it was time for her when The Middle One was about a minute old. I supported the decision for about four days. (What can I say I was new and still unsure who was in charge.) After the fourth day of a balancing a newborn over a screaming toddler on a toilet, I quit. I told Ms. Donna she could continue on as she wanted but she could expect no follow through from me. Not yet anyway. I sent her to daycare every day in pull ups. About three weeks later that spunky little two year old announced she wanted underwear and that was that. She wore a pull up to bed for a while, but during the day she was all set. No thanks to me.
The Middle One was a bit older and again there was a baby in the house. I started feeling the pressure to get this giant boy in underwear. It seemed absurd that he was still wearing the same thing as this tiny little baby. Also, two sets of diapers each trip to Target was breaking me. Socially and financially, pull-ups are expensive. I read the books and watched the videos and bought the super hero underwear. And yet, I almost immediately sunk to the lowest common denominator while attempting to train him. Somewhere along the way I lost all patience and common sense. I was mean and punitive because I was sure he was just being stubborn. Finally, after about a week I decided this wasn’t worth scaring him and stressing me. I quit. Back into diapers. About three weeks later, this confident little man announced he wanted to wear his super hero underwear and that was that. One week later he ditched the pull ups all together. He was out of them at night before his big sister.
Needless to say my history has led me to develop a “when they’re ready they will” approach to the toilet. I firmly believed no kid would go too long. I mean you don’t see any kids in the kindergarten bus line with that tell tale Huggies waistband right? Until now.
My almost three and a half year old has no interest. Sometimes, if I catch him in the act I’ll pick him up and plop him on the toilet. Then and only then, he’ll poop in the potty and then share that news with the world. But he never asks to go and when placed on the toilet at other times, he appears to still have no control over what he is doing. And yet, I’m feeling that urge again. the one that says, “he’s too old and you’re going broke.” Here is the catch with the third child-I’m a little shell-shocked by my last performance and now add that there is no time. Between camp and school and my work schedules, I’m not sure we have any time to devote to training. Not to mention, I’m old…and tired. I simply am not ready for the fight. I know there are a million strategies and stories that prove it will be seamless. I don’t believe them. I’ve tried them before. Dammit, I am not new at this. I hate when I feel new again.
For now, I’m committing to Pull-Ups and racing to the toilet with him when I see “that look” in his eye. Then I’m committing to crossing my fingers when he goes to pre-school that the peer pressure will be too great. Yep, that’s my strategy for potty training-crossed fingers and time.
If it works I’ll let you know.
Thanks for coming to the circus. Cheers!
P.S. Looking for more parenting guidance and tips for self-care? Check out From Chaos to Calm a guided training to help you feel better in this tough season.

« A smile in a storm
Up with the birds »