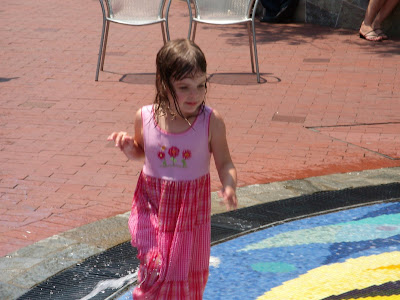 I was a Gamma Girl. I was never in the popular crowd, but I had friends in every group. I was never a cheerleader but I knew them. They were nice. I was President of my sorority which as anyone knows means I wasn’t the popular one. That girl was the Social Chair. I liked being a Gamma Girl and I have no problem with Alpha Girls. They just possess a level of cool I never had.
I hope to be raising a Gamma Girl. So far, it’s working. The Girl is nice to most everyone. She likes to be in a leadership role, but if others do not want to play along she’s cool just hanging on her own. She knows a lot, but she is rarely smug about it. We have been very lucky that she has, thus far, been surrounded by other Gammas. That was until today…
Here’s the scene: we are playing around with iTunes and she asks for the song Hot n Cold by Katy Perry. When I start singing it, she gets all irritated (notice I said nice to most everyone-I am not included in that group) and with her best B attitude says,
“mom those aren’t the words.”
“Yes, they are.” (Because, of course I am not mature enough to just let it go-it’s music and for now, at least, I still know more than you-you darn six year old! )
“No, mom (insert Alpha Girl Name here) said they weren’t.”
“What do you mean?”
“Well, when we were singing it at recess I sang it like you and she told me I didn’t know what I was talking about that I was singing it wrong.”
Here is where, as heat travels rapidly through my entire body, I say in my head, “calm down, they are six. You must handle this appropriately so you can teach this future woman how to not throttle this girl next time she sees her.”
It didn’t work.
“Well, (Alpha Girl) was wrong. I am right. Here is the song.” (Played on iTunes for her to hear for herself.)
She responded with a very appropriate, “YES” and an accompanying fistpump.
I guess I am not SO okay with Alpha girls. I should work on that.
And pray that my kids doesn’t throttle that girl tomorrow.
Maybe she’ll just have a sing off. Now that would be Awesome.

Just read this and had to share. Take a minute and

This is your a message to slow down and focus. Bec

New Episode! Such great conversation with Becky of

In the city writing all weekend but always have to