You are here: Home / For Parents / Babies and Toddlers / Two is a glorious number 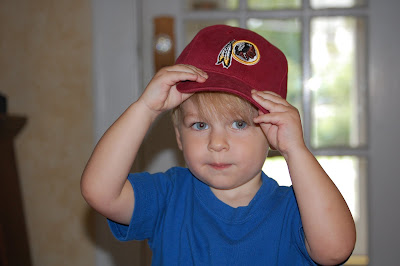 Terrible Twos. We all know about them. In essence, our little monkeys become little monsters who are similar in nature to teenagers or sometimes menopausal women. They are one raw nerve, which can in turn make them delightfully funny or a horrifyingly red-faced, kicking screaming demon.
My oldest had very few terrible moments but those that she did have started at 18 months-not two years. She was our first, so nothing was easy. But looking back she was the most simple because she just needed to know the plan. If we gave her fair warning of upcoming events-laid out what was next and next after that- even if she didn’t like it she made very little fuss. Once we discovered that communication secret, she was nothing short of delightful.
No amount of planning or preparation helped The Middle One. In fact often too much information backfired because it stressed him out farther. The Middle One was a textbook case of overly-sensitive. This meant that at times he is the sweetest, snuggliest warm hearted creature ever and at other times literally everything could be a potential temper ignition and we had no idea why so there was no prepping for it. I have the “tantrum in a public place” scars to prove it. His terrible twos lasted well through his fours.
The Baby is the first two year old that I have spent significant time with alone. He has no younger siblings (the others did by age two) and his two older siblings are in school for a large portion of his day. He is not in preschool yet, which is new for me. I sent my others at two and a half, but the preschools here are not the same as in Maryland-at least none that I have found.
The result is that we hang out a lot. I am not sure if He is different or I am. Either way, the tantrums don’t really bother me. They are actually quite entertaining. He is just as unreasonable, if not more, than his older brother. He is twice as vocal as his older brother was which means he is louder and wields a very strong vocabulary so he makes his discontent clear to all. This proves for way more public embarrassment. The thing is, I’m rarely embarrassed.
I think one secret is I have realized that my kids are backwards. Most children develop a receptive vocabulary long before an expressive one. My kids-all three-have been reciting Shakespeare sonnets by 18 months but give you one big blank stare when you ask them to bring you a toy.
Their understanding has come along around 24-30 months which is when most of their peers catch up expressively.
With my first two this provided endless frustration. I would yank my hair out wondering why they could tell me all about play time at school but couldn’t be talked out of a fit. Worse, I would freak when they failed to do something totally unreasonable like remember to clear their plates because I had “told them a million times”. (Yes, age two. I know, I’m an ass.)
Remember, I’m a former educator so I learned the hard way in a classroom that you have to repeat something an ungodly amount of times before it really sinks in. I don’t know why I can’t remember that with my own kids-especially when they are a bunch of chatty Cathys.
With the baby though, I have finally gotten it. I have relaxed my once outrageous expectations and our time together is much more enjoyable because of it.
I know sometimes there is nothing I can do but ride out a temper tantrum. So I am more prepared to leave places because I try never to stay somewhere if his tantrums will bother anyone else. It may take me a while to extricate him from a carriage seat or stroll him out of a restaurant but we will leave if it looks like there is nothing that will bring him back but time.
As for “not listening” I have continued to ask things of him, but I don’t get frustrated nearly as often when he doesn’t do them. And then, when (like this week)he starts clearing his plate from the table and bringing it in to the kitchen I am not only pleasantly surprised, but I gush so much over the behavior that it becomes a more regular thing-from all of them.
Spending time with The Baby has given me such prospective. Only focusing on one toddler and not a toddler and a baby has allowed me the space to enjoy all the things that come with toddler-hood; tantrums, defiance and all.
People say the baby of the family is spoiled. I was the baby and I never felt spoiled but I did have a lot more time with my mom and a lot more room to grow. If that’s spoiled, than you can count My Baby in to the club as well.
Apologies to the older siblings, but don’t worry, he’ll be wishing he were you when he’s stuck alone at home with his crazy old parents while you’re off at college.
Thanks for coming to the circus. Cheers!
P.S. Looking for more parenting guidance and tips for self-care? Check out From Chaos to Calm a guided training to help you feel better in this tough season.