You are here: Home / Blog / Rolling with It 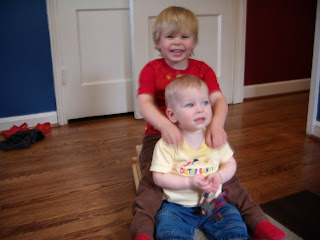 Yesterday we had plans to work on our Mommy School activities and then head to the beach. We told friends on Sunday that we’d see them there. I had lunch planned. I got up early to make breakfast and gather the necessary materials to carry out the plan.
Then a funny thing happened: my boys played together, really well.
Don’t get me wrong, they always play together but they almost never play without at least a little screaming and fighting and calls for “Moooooooom”. This summer has been particularly tough as The Baby tries (often in vain) to assert his small human rights and The Middle One wonders what happened to his compliant little plaything.
Yesterday? Well, yesterday we had a little magic happen. From early morning, they had every single Lego on the floor of their rooms and they built and shared and created and played. All. Day. Long.
The Girl kept asking when we were going to carry out our plan and I kept answering her with a tilt of my ear toward the stairs where we could both hear the joy coming from upstairs. Then I’d say, “I’m just going to ride that out for as long as it lasts.”
Much to her chagrin, six o’ clock rolled around and we were still home. I thought for sure that is when all things would break down but no, they bonded straight through until bedtime.
I got a lot accomplished, including watching a bit of the Harry Potter marathon with The Girl.
It was a glorious day. I will never plan for it again. I know better.
If I’m gifted with it again though, I will not hesitate to abandon the plan for it. Even if The Girl is “sooo bored”. She’ll understand some day.
If she’s lucky.

« Music Snobs-Remix
How to Get Your Baby to Sleep »