You are here: Home / Blog / Lady, be quiet already 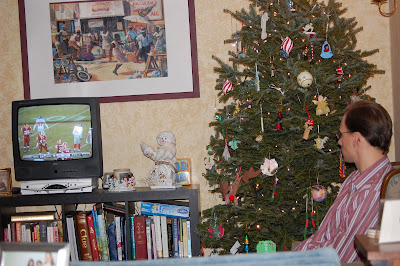 It’s the Redskins. The Redskins. The only thing in the world he might love more than us-even if he’ll never admit it out loud.
And yet I yammer away. I yammer about our budget. I yammer about The Baby’s rash. I yammer about who the heck knows what.
During the only Redskin game that is televised in this Giant town. All. Damn. Season.
Shut Up woman.
He sits and “listens”-meaning, he doesn’t openly sigh or roll his eyes or scream, “please quit yammering!”. He actually makes eye contact every now and then and even musters a response or two.
It hits me about 10 minutes in: I should really just be quiet.
He doesn’t ask for much. He works hard. He doesn’t go out boozing with his guy friends. He doesn’t jet off for boys’ weekends. He is here as often as he possibly can be. He golfs, maybe twice all year. Mostly, he shovels and mows and changes diapers and plays catch and races to the park and does dishes. He grills a mean piece of chicken and pours a top notch G&T or Whisky Sour-depending on the season. He makes me laugh-a lot.
He also leaves recycling on the counter and often forgets the trash. He rarely stops at the grocery store and he infrequently makes it home in time to do much but kiss the kids goodnight.
But overall, these things don’t matter. What does matter and what I should remember more is that he is a fantastic dad, an amazing husband and one of the best men I know.
So shut the hell up and let him watch his Redskins.
Sheesh.
Thanks for coming to the circus. Cheers!
P.S. Looking for more parenting guidance and tips for self-care? Check out From Chaos to Calm a guided training to help you feel better in this tough season.