You are here: Home / Blog / Imagination Playground-getting out during Staycation

This week is our staycation week. While I hate that term, I have to say I have enjoyed the week. We have had just the right amount of rest, relaxation and family activities. When I got an invite last week to go into the city for an event at Imagination Playground I jumped on it knowing that The Husband would be home to make it possible. I sometimes get these types of opportunities and turn them down because while I am a pretty good ringmaster around town, going into the city with all three alone is still very daunting.
We started the morning having to wake the kids who were pretty angry at being up “so early”. Ironic considering on Saturdays and Sundays they tend to rise hours earlier than when we woke them yesterday.

We decided to drive in and as usual were surprised at how quick and relatively easy it was. We arrived at the South Street Seaport Museum for a spectacular lunch complete with the most delicious sandwiches from ‘wichcraft a “sandwich shop” that Tom Colicchio makes sure is way more than a sandwich shop. Seriously, I ate all of my gourmet chicken salad, half of my husband’s turkey and avocado and most of my kids’ grilled cheese panini sandwich. This is probably the reason that all the pictures where I’m not hiding behind a stroller have promptly been deleted, but that’s a post for another day.

While the kids were forced to eat some healthy food, they really enjoyed the ice-cream sandwiches from Stew Leonard’s. I even tasted a dollop of frozen yogurt between two rice cakes drizzled in chocolate. Delish.

During lunch we got a brief introduction to Imagination Playground from Barry Richards a Principal at The Rockwell Group who oversaw the creative direction of the Playground at Burling Slip. I loved everything he said about why they do what they do and I couldn’t wait for my kids to get in there. The Girl loved his vision so much she insisted on having her picture taken with him. She’s a Big Idea girl-what can I say?

After lunch we had recess if you will as we marched right into the park. The idea behind Imagination Playground is to create unstructured play for kids, which is right up my alley. I am a huge proponent of schedule free and no planned activity time for kids to just run and create and imagine. The team behind Imagination Playground feels the same. It was architect David Rockwell’s innovation to bring the old fashioned woods and streams of an almost lost youth to the Wii and Playstation kids of today. In the city, it’s a little slice of jungle, beach and pond. In addition to slides and ladders and places to swing and climb, there were huge building blocks that included ramps, balls and posts. My three year old spent his entire time there. I stood fascinated by what he and his cohorts dreamed up 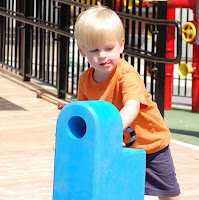 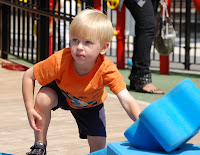 There was a huge sand structure, but for my beach kids it held no appeal. I would imagine though for someone growing up in New York City, the sand structure, with its wheelbarrows and endless castle possibilities is a major draw. The evidence of this was the huge number of kids over there at any given time yesterday.

My older two kids spent all their time waist deep in the water structure. In their words, they could “float things, sit on things like boats and if you got lucky fall off and get soaked.” There were also geysers and fountains and plenty of splashing to go around. They were sufficiently soaked when we left. Thank goodness we brought a change of clothes and the park was equipped with a large, pretty clean bathroom for them to change before our next adventure.
After Michael Lord Director of Education at the South Street Seaport Museum, gave us a brief history of the land where we were standing we headed over to tour a tall ship. Here we got to see the kids’ personalities in action. The Girl marched right up the ramp and on more than one occasion had the tour leader say, “you could lead this tour.” The boys, on the other hand, both cried that they didn’t want to go up the ramp. I was able to talk them into at least trying and sure enough they were natural pirates as soon as their feet hit the deck. They loved the poop deck of course and they even got to watch their dad lift a sail.

Before we knew it, we were back in our van headed through the tunnel toward home. It was a successful staycation activity and dare I say I might even try it again.

« Back to School Schedules
Jersey Shore Girl Fights-What the?!? »