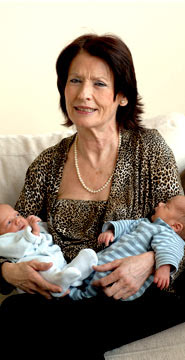 I know this is way old news, but when the story broke, I was at a work conference. My work conferences are not like most. They are all sunshine and light and full of positive energy. So, I refused to pierce my happy bubble by giving this story any time. I am back now and as I start to write anything else on this blog, I keep coming back to this: a 67 year old woman brought babies into the world and before they turned three-she died.
I don’t usually speak out on controversial topics (John and Kate excluded apparently). My husband knows my myriad opinions, but most of them I only share with him. I hate confrontation and I hate offending people even more. I feel like people are entitled to think and feel whatever they choose without having to hear my two cents all the time. Not to mention, an opinion doesn’t count for much unless you’re willing to do the work and be brave enough to stand up for it so I choose the opinions I share very carefully.
I can not stay quiet on this topic. I know it’s probably bad karma to talk about a person after they’ve died, and it is certainly bad karma to judge a person ever-but it is a risk I’ll take. Motherhood, most of the time, should be a selfless position. I know we talk (especially lately) about preserving yourself and not giving totally over to your kids. However, generally speaking you are supposed to put the children’s needs before your own desires (not needs) and certainly consider their well being-present and future when making decisions for your life.
Making the decision to bring children into this world when you are well beyond your retirement years is a decidedly un-selfless thing to do. In fact, Ms. Bousada pointed right to the selfish nature of her decision when she said to a Spanish newspaper, “I think everyone should become a mother at the right time for them. Often circumstances put you between a rock and a hard place, and maybe things shouldn’t have been done in the way they were done, but that was the only way to achieve the thing I had always dreamed of, and I did it,” she said. Not once in this statement, or any for that matter, are the kids even mentioned.
Of course this is personal. My father died when I was four and I officially became at orphan at 30-not young, but not old either.
My father, of course didn’t expect to die at 51. In fact, I’m pretty sure he didn’t even expect to have a baby at 47, nor my mother at 43. They did. Then he died and my mom raised a four year old (and five other kids) all alone. She did a fantastic job. I had a great childhood. But I had no father and my kids know no grandmother Ritz and that sucks-period.
So, of course this feels personal. Which maybe means I should shut up about it, but I can’t. I know my situation isn’t universal, but it doesn’t take a mathmetician to figure out 67 plus 20 years equals=very old mother.
This woman CHOSE to bring kids into this world knowing full well that she-the only parent- would not be around to take care of them into their adulthood. Selfish. Sure, her argument is that her mother lived until she was 101. Even if Ms. Bousada lived into her hundreds, did she really expect to be the care-giver and not the one needing care? Short-sighted. When her kids’ should have been thinking of college, they may have been worrying about their mom taking her proper meds and that is more than a 20 year old should have to handle. Which means it is too big a risk to take. .
The problem with sharing my opinions is that I get all verklempt and thus can go on-rambling forever. So, I will force myself to shut up after one last shot.
Technology is a fantastic thing. I am so glad for the advancements in medicine that allow people to bear children. But with advanced technology comes huge responsibility for both patients and doctors. This woman most certainly should not have pursued childbirth at 67. She had to reactivate-through technology- her uterus as she had gone through menopause 18 YEARS prior. Then she had to fly to Los Angeles, from Spain (because they have a legal limit of age 50) and lie about her age to be artificially enceminated. She absolutely should not have lied about her age. The doctors who treated her are not off the hook either though. They have an age limit of 55-which is questionable in and of itself- but they are trying to claim they had no idea she was over the limit.
The doctor from the clinic said, “We don’t ask for passports. When was the last time you went to the doctor and they asked for an ID?” “We are not detectives.”
This means, she had to show no proof of identification. They just took her word on forms without any question or regard for their role in the lives of these future people. Funny how they have no trouble asking you for a social security number so they can bill you properly, but they think it is crossing some line to take the time and check your age before impregnating you?
These are not only embryos people-these are lso potential lives we’re dealing with here. Take a little more time. Demand a little more proof. Consider how your decision affects everyone involved.
Think beyond the womb.
Thanks for coming to the circus. Cheers!
P.S. Looking for more parenting guidance and tips for self-care? Check out From Chaos to Calm a guided training to help you feel better in this tough season.