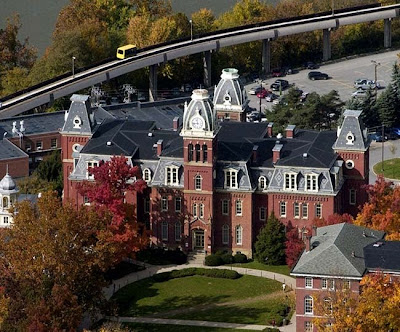 There is a song called Home is Where the Heart Is by Lady Antebellum, that gives me goosebumps every time I hear it. Kevin tried to tell me about it a while ago, but I need to come to songs on my own. Regrettably, I was probably mean to him. I am crazy about music and I don’t like when people hear songs that are very “me” before I do. Thankfully, he knew all about the crazy when he married me so now he just laughs and shakes his head when I tell him about the “new” song I love.
Anyway, the song is about a girl who sets out to see the world and ends up…in West Virginia. She stays because she falls in love there. I think I did too. The difference is she fell in love with a blue-eyed man. I fell in love with the place and all its people.
I know, I haven’t lived there in 13 years (geez!) and I only lived there for 4 and a half, but it still feels like home. It doesn’t even look the same as when I lived there, but every time I crest the hill before Cheat Lake all my troubles fall away and I feel like I have come back to the place where I really belong.
I’m sure it’s just college. I noticed my nephew has a song about Carolina on his iPod that I’m sure makes him long for his Columbia Gamecock home. I know I am not unique in my fond memories of my college town.
But there is something more with me. I didn’t even want to go school there. But now if I could find my husband a job there, we would move back. I have tried since 1996 to choose a hometown that would replicate Morgantown. (I have gotten pretty close this time.) I can’t explain the fascination, but I believe it has to do with the person I became- because of the people I was surrounded by- while living there.
It was the first time I was really on my own- obviously. More important, it was a time that I was exposed to people that allowed me to grow into whatever I chose to be.
There were no preconceived notions of who I was. I was brave-for the first time trying things I’d always thought I wanted to try. I didn’t play a single sport in college. I went to the theater. I worked at a radio station. (Which was only a little brave as I think I spent two whole seconds on the air before chickening out!) I waited tables with grad students and future dentists. I nannied for rich people-while they shopped. I handled the money for a pretty large organization (what?!?!) and I did it well. I changed my major a million and one times which, while it drove my mother crazy, allowed me to sample every field I’d ever dreamed of and I found I not only really like economics, but I’m good at math. I met people who were the first in their family to go to college. I met future Rhodes Scholars.
I lived with a writer/singer/mystic and a dancer. My two roommates literally fell on the opposite end of the spectrum from me and I am so blessed to have spent those years learning from each of them. I learned that having self-confidence shouldn’t make people mad at you. There are strong women out there who don’t mind being surrounded by strong women. I bought my first pair of hiking boots and dated a guy who knew all about trees. I lived in a house with 40 girls who were at times insane and at times the greatest support system ever. I realized no matter the background, all these people were pretty much the same in the pursuit of a better life (and a weekend party).
West Virginia will always feel like home-no matter where I live or how long I have been away. It is the place where I met myself and all the amazing characters who helped introduce me.
Thank you Lady Antebellum:
Mama said home is where the heart is
When I left that town
I made it all the way to West Virginia
And that’s where my heart found
Exactly where I’m supposed to be
It didn’t take much time
It’s just south of the Mason Dixon line
Thanks for coming to the circus. Cheers!
P.S. Looking for more parenting guidance and tips for self-care? Check out From Chaos to Calm a guided training to help you feel better in this tough season.

« I care who Samantha is!
Girlfriends »