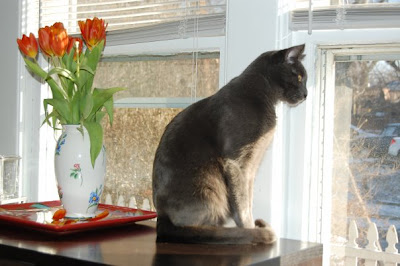 I have lots of mommy things to say, but instead I’ll give a feline update because I know there are a few of you pet types who want to know: Wendall the cat appears to be on the mend. We are pretty sure he either got stuck under the wheel of a tractor/lawn mower OR a tire fell and landed on him. We have a shed out back that is filled with car parts from our landlord’s shop. Wendall has never been terribly smart about where and how he prowls. Since he started escaping into the outdoors we have spent about four days and a few thousand dollars fixing him after fights (that he always loses) or accidents that were fairly easy (albeit expensive) to fix. This time he got into a bit of a predicament that ended in serious injury.
Saturday morning the accident happened so we took him to the vet and had as much work done to him as we could afford and as his little feeble body could handle. By midnight Sunday we were in our second vet-this time the emergency-having air evacuated from his chest cavity in hopes that his collapsed lung would refill. It did and then we were on 24 hour watch to make sure it didn’t re-collapse. It was bad. We prepared the kids to say goodbye. He was essentially in a coma for two days…on my bed. Yuck.
Luckily, we were too chicken on Sunday to “make the call to end his misery” and decided to give it one more day. There was no logic to this-that cat was clearly in pain and looked terrible but something just wouldn’t let me bite the bullet if you will. Wouldn’t you know, we woke Monday to a purring cat. He still wasn’t moving but his breathing was way less labored and he was no longer frothing at the mouth. Hey, I’ll take a stationary purr anytime.
We seem to be out of the lung woods but now that he can breathe he is remembering that he was actually pretty badly injured so if he moves at all, he hobbles around on two hurt legs (hind and front).
Yesterday, I took him for a vet check and he got some IV fluids and peed on the office floor. Fantastic. My vet version of McDreamy (Literally on the Mc part-his name is Scott Kilcullen.) handled it beautifully. Seriously, I wish this guy was my doctor or at least my kids’. He is amazing in so many ways and not just his roguey (roguey-yep, made that one up too spell check) Irish/Scottish looks. Dr.Scott said we’d moved from moment to moment toward day to day but we still weren’t out of the woods. I was just so happy the cat was up and about I barely heard word the doctor said. But I trust him with my life, so today we’ll dope him up on pain meds (the cat, not the doc) and watch to make sure he gets up and about a little more each day.
The good news is he woke today demanding a cuddle and ate a little bit when I placed him in front of his bowl. His personality seems to come back more and more and that is his best quality so it makes me smile.
This cat truly has nine lives, but for now he is grounded and will be spending those lives INdoors!

** Sorry for such a dry news-like post. I know it’s so unlike me but I’ve been a bit traumatized so my witty/snarky writing skills are a little mottled today.;) Want something better? Read here.
***Thanks OSM for the pretty picture.

« The Weekend That Wasn’t
Sometimes being a wifey sucks »