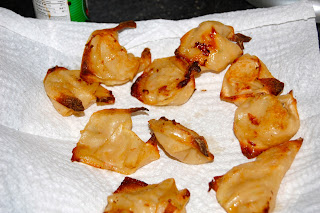 This recipe is one of the first the kids actually asked for again. I consider that a success. It doesn’t hurt that I was pretty dang proud of myself that I could make a Chinese Take Out favorite. The good news is they’re baked so they’re not as greasy and unhealthy as the restaurant ones. My recipe is inspired by a Jessica Seinfeld

recipe. I made it her way and the kids didn’t like it as well because the ingredients have strong flavors. The Husband and I loved it, but I would rather all five be happy so I’ve tweaked a few things. If you want her original check out her book Double Delicious which is great.

Most importantly, don’t look at this list and think you can’t do it. All of these ingredients are found at the most basic food store. If you don’t have sesame oil, use canola or vegetable. The soy sauce and ginger are the most powerful tastes anyway. The wrapping is not a quick process but it’s easy and almost therapeutic. You can be as sloppy as you want. If you have kids that are old enough to know what’s coming, they’ll leave you alone so it’s peaceful too!  You could also get older kids involved as well. If the family works on the wraps then it goes much quicker.

Be brave and give it a shot. You won’t regret it.

*Cauliflower Puree is easier than it sounds. You can make a bunch ahead and when I had babies that’s what I did. Now that my kids are all over the place, I make it as I go. For cauliflower, I either use fresh or frozen-whatever I have. I steam about four of five florets in a microwave for about four minutes. (My microwave is terrible so your will probably take about two minutes!) Then I throw it in a mini-chopper

(you can use blender, food processor etc.) with a bit of water (Just pour in a little at at time until you get a smooth texture.)  and pulse until it’s smooth and creamy. Then you can add it right to a recipe.