You are here: Home / Blog / Big Brother Said So 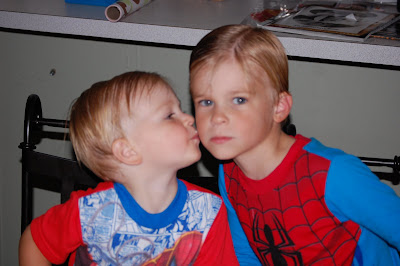 Yesterday Kevin went to work late so we could all walk Faith to school. He got The Baby out of bed and dressed for the day.
During their morning chat, G told Kevin all about his favorite super heroes and their corresponding super hero noises (ie:Spiderman shoots webs-psshh).
When they got to Wolverine, he told Kevin that the sound was ching, ching and Wolverine therefore had “chingers“. They are knives-that go “ching” so they’re chingers right? Of course.
The Middle One instantly piped up (he had apparently had enough Super Hero blasphemy) and said, “they’re called claws, not chingers.”
So from that second on The Baby has called them claws. They still make a ching noise, but make no mistake-they are claws.
He even corrects me as I try in vain to get him to call them chingers.
Here’s how it goes:
Mom: Who is this on your shirt?
G: Good Guys.
Mom: Yeah, but this yellow guy-who is he?
G:Wulberine
Mom: What does he do?
G: He goes ching ching (hands splayed out, very claw-like)
Mom: So what are those called?
G: Claws?
Mom: I thought they were chingers. Right? Chingers because they go ching ching?
G: No mom, they are claws that go ching ching.
Mom: Really? Not Chingers?
G: (Totally exasperated at his thick brained mother) No, just claws.
Mom: Oh
Big brother has learned up that Baby too fast.
I miss the chingers.
*** PS-spell check does not like Ching or Chingers. I guess it’s not really a word. Hmm curious.
Thanks for coming to the circus. Cheers!
P.S. Looking for more parenting guidance and tips for self-care? Check out From Chaos to Calm a guided training to help you feel better in this tough season.